The Duke of Cambridge Published on Twitter: “As President of the FA, I am joining the entire football community in the social media boycott this weekend.”

The football-led campaign, which was supported by leading sports associations and also supported by British Formula 1 driver Lewis Hamilton, began on Friday at 3 p.m. for three days as a sign of solidarity against racism, abuse and discrimination.

F1 bosses spoke to all 10 teams about joining the blackout ahead of the Portugal Grand Prix this weekend, but there are no plans to officially participate.

However, seven-time world champion Hamilton said he would support the campaign.

“In order to show solidarity with the football community, I’m going dark on my social media channels this weekend,” said Hamilton, the only black Formula 1 driver, on Instagram – where he has 22 million followers.

“In our society there is no place for any kind of abuse, online or not, and for too long it has been easy for a select few to post hate behind their screens.

“While a boycott may not solve this problem overnight, we need to ask for changes if necessary, even if it seems like an almost impossible task,” added the Mercedes driver, who is driving in Portugal this weekend. 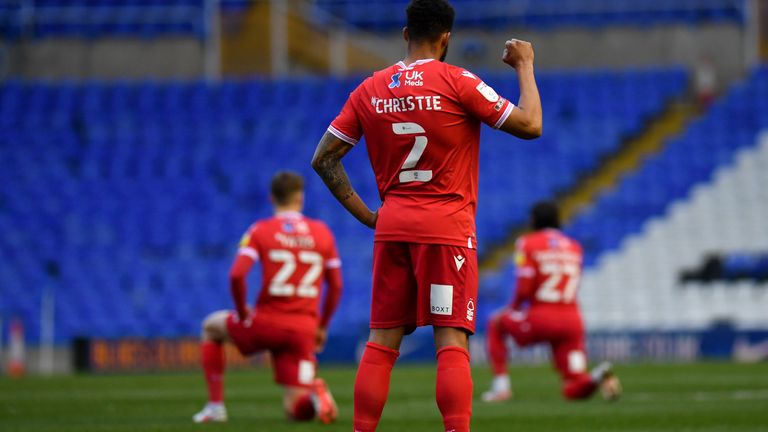 Speaking of the campaign, Hamilton told reporters, “I was mistreated a long time ago when I was younger, reading the comments and trying to connect with people.

“There was a time when I had to understand that you can’t read every comment and you can’t take it personally. If you let these things come to you, it can really ruin your day.

“I’ve resigned and generally not looking for this stuff or validation. I know I’ve received amazing support from a lot of fans who follow me and I am grateful for the support I get.

“It is clear to me that racism is still an issue and social media platforms need to do more to combat it. There are algorithms and they can see things and take steps to create an anti-racist society, and that is.” what we have to push for. “

Other F1 drivers have supported the campaign, including McLaren’s Lando Norris and Williams driver George Russell.

Formula 1 has issued a statement in support of the boycott: “We continue to work with all platforms and our own audiences to promote respect and positive values ​​and to stop racism.”

On the eve of the campaign, former Arsenal striker Thierry Henry said the boycott was a “start” to the fight against racism and he wanted supporters to use the same energy in combating abuse as they do in rejecting failure European Super League last week.

Henry, the last month removed himself from social media Regarding racism and bullying on the platforms, he said, “A lot of people are – I’m not saying they wake up because everyone was aware of it – but now they are loud about it and have the same energy that they put into the super league .

“It looks like we’re trying boldly to get these big companies to answer the question we have and I know it’s not easy on their side either, but that’s your job.

“(What) is the world of English football doing and what’s going to happen over the weekend? People ask me, ‘Is it enough, the weekend?’

Since the campaign was launched by the English Football Associations, several other organizations have joined, including UEFA, England Rugby and the Lawn Tennis Association.

UEFA President Aleksander Ceferin said: “I urge everyone – players, clubs and national associations – to submit formal complaints when players, coaches, referees or officials are victims of unacceptable tweets or messages.

“We have enough of these cowards who hide behind their anonymity to spit out their harmful ideologies.”

Other sports have supported the campaign, with governing bodies in cricket, rugby union, rugby league, tennis, darts, horse racing and cycling all boycotting social media over the weekend.

Sponsors like Adidas, Barclays, Budweiser, Nationwide and Cazoo have supported the campaign, and broadcasters like Sky Sports, BT Sport and talkSPORT also support it.